Watch the concepts from New Trials come to life thanks to its creative fans.
Girl in the Green Dress Cosplay
For the first time ever, someone used New Trials as a cosplay theme! Longtime fan teruteru-bozu created a dress from Sakura's Vogue Nippon photoshoot during Chapter 55: Platinum.

I always wanted to try a New Trials bound. I didn't have the exact pieces to match Meilin's outfit in Chapter 42: A Little Girl's Dream but I owned enough clothes to make a recreation of the grey dress and blue cardigan. The fact that I owned a blue butterfly clip sealed the deal. I'm Meilin and my cat is Kai. Thanks to Mesel for the inspiration.

Why waste a good outfit on only one picture? Luckily my husband already owned a black shirt and black pants so dressing him up as Kai was a piece of cake. I'm so glad that nightlyvisions drew this back in 2004.

I had my eye on this bunny hoodie that Wish-chan described in Chapter 65: Cohabitation, Part Deux for a while now so much husband surprised me with it for my birthday. There was a problem with the zipper so the company sent me a second one. A tailor fixed the first one for free so I sent it to Wish-chan, but not before cosplaying Wish-chan's fanart with my husband!

Wish-chan posted Chapter 72: Almost Left Behind in 2016 and I was always fond of Sakura and Syaoran's outfits that Syaoran bought after the Li Clan meeting. This year I realized that I could DIY a jean jacket I already owned into a cropped one and I asked my wonderful mother to sew a gingham skirt for me. It wasn't long that I was able to put both Sakura and Syaoran's outfits together and pose for the different moments to celebrate New Trials' 20th anniversary in September 2019!
They went into a boutique in Shibuya—it was a brand that Tomoyo often frequented. She was not surprised to see Syaoran walk down the men’s aisles and quickly select an outfit—a pair narrow-cut chinos, a blue button down chambray shirt over a white shirt, and brown loafers. [...] With a frown, Syaoran flipped through the articles of clothing and selected a blue and white checkered gingham skirt, paired with a pale pink pinhole lace shirt and a faded jean crop jacket. He fumbled through the shoes, and picked out a pair of white brogues and tossed her white lace knee socks. “Go try this on.” [...] Sakura swirled around in the blue-and-white checkered skirt trimmed with pinhole lace. Belatedly, she caught her reflection in the mirror next to Syaoran and wondered if he had color coordinated their outfits intentionally. “Well, thank you then.”
“I bet I can devour a whole pan of large pepperoni pizza right now, and I’m not sure I like pepperoni.”

Sakura realized that Syaoran had not been exaggerating, and after sharing a huge pan of pepperoni pizza, the two went into a little corner café afterward and ordered melon soda, a toxic lime green color, alongside a strawberry cheesecake and cherry tart. 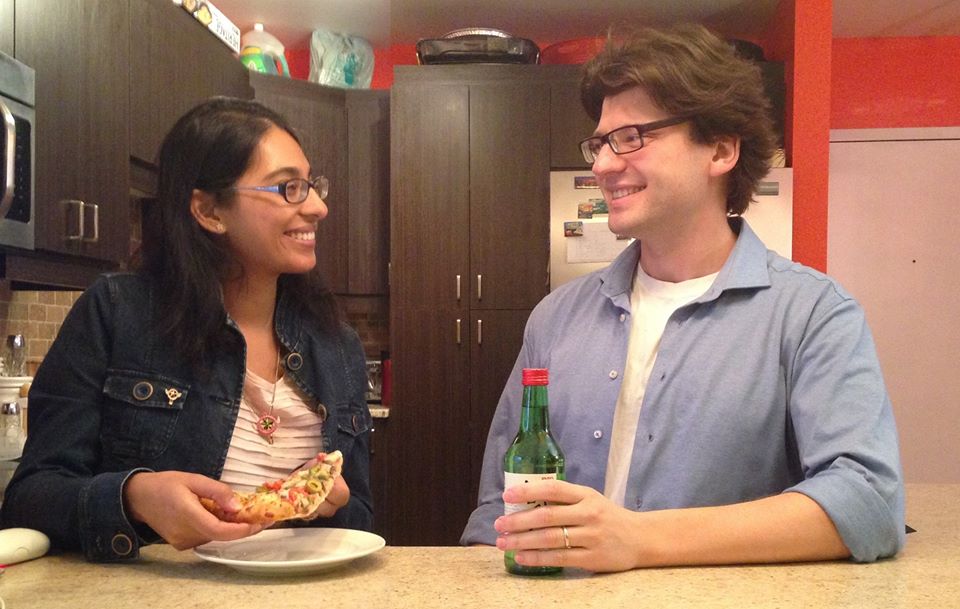 “I haven’t been to a movie theater in ages!” exclaimed Sakura. She juggled the popcorn and soda cups. “What are we watching?”

“I don’t know—everything was sold out, so I got whatever ticket was available,” said Syaoran peering down at the tickets. “It’s called Ring: The Return.”

“I hope it’s a romantic comedy,” said Sakura. She was okay with melodrama as well.

They took seats in a near-empty theater.

And the film started off with a ghastly murder scene that left the audience shrieking.

They squeezed into the machine together, and Sakura fed bills into the slot. Syaoran gawked at the sheer number of choices. “What do we press? It’s so pink in here.”

“First, we need to choose the backgrounds—let’s do this blue sky one, the pink bubbles and the rainbow. Oh, we need to pose for the pictures—look at that camera.” There were several consecutive flashes, and Syaoran stared at the screen, stunned. Sakura shoved a pen into his hand. “Hurry, now we’ve got to decorate—see you can write something. I’m going to write today’s date. Here, you can add stamps—I’m going to add wolf ears for you. And ribbons here, and sparkles. Syaoran—we only have 10 seconds!”

The two peered over the final laminated sticker sheet of rainbow explosion. Sakura laughed. “Syaoran, you have the same expression in all the shots!” And Syaoran stared down at his sheet and saw Sakura winking in one picture, making a goofy face in another, imitating his solemn face in the next one and beaming in the final one
The crepe didn’t stop them from sampling piping hot takoyaki, little pieces of octopus coated in batter, purchased from another stand couple blocks down. 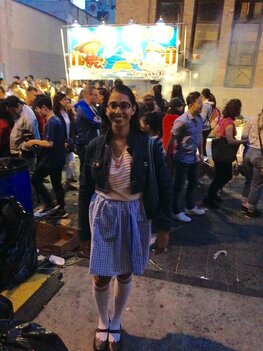 Syaoran knew not when he had drifted off to sleep, but he found himself jolting up with a horrible neck ache. He shook Sakura. “Hurry, we’ve got to catch the train or else we’re not going to make it to school on time!”
Sakura rubbed her eyes, a gray suit blazer slipping off her shoulders. “When did we fall asleep?” Drowsily, she had a vague memory of leaning against a broad shoulder and basking in the warmth of the sunlight. And her shoulders, bottoms and knees all ached.

Back in 2010, Melanie did a test photoshoot inspired by the Veil, which was featured in Chapter 57: The Gathering. It never got the chance to come into fruition, but Melanie gave me permission to upload a couple of shots from the shoot.

When long-time fan Melanie got married, she and her groom were connected with the red string of fate, which was featured in Chapter 62: Designs in Crime for the "Love" portion of the Fashion show. Coincidentally, her dress (white, black and lace) has some similarities to Sakura's dress in the same category.

My brother gave me a Star Key phone charm for my birthday and I already owned a blue ring. I was very excited to recreate Sakura's necklace from early Arc IV. This fanart by WinxC1ub does the best job of showing us what Sakura was wearing on her necklaces during that period of the fanfic.

For New Trials' 19th anniversary I shared this photo of my recreation of the pink and green bear mugs that Sakura gave Syaoran as a thank you gift for letting her stay with him in Chapter 44: Like a Child. I painted it myself as a ceramic café that I went to for a bachelorette party. 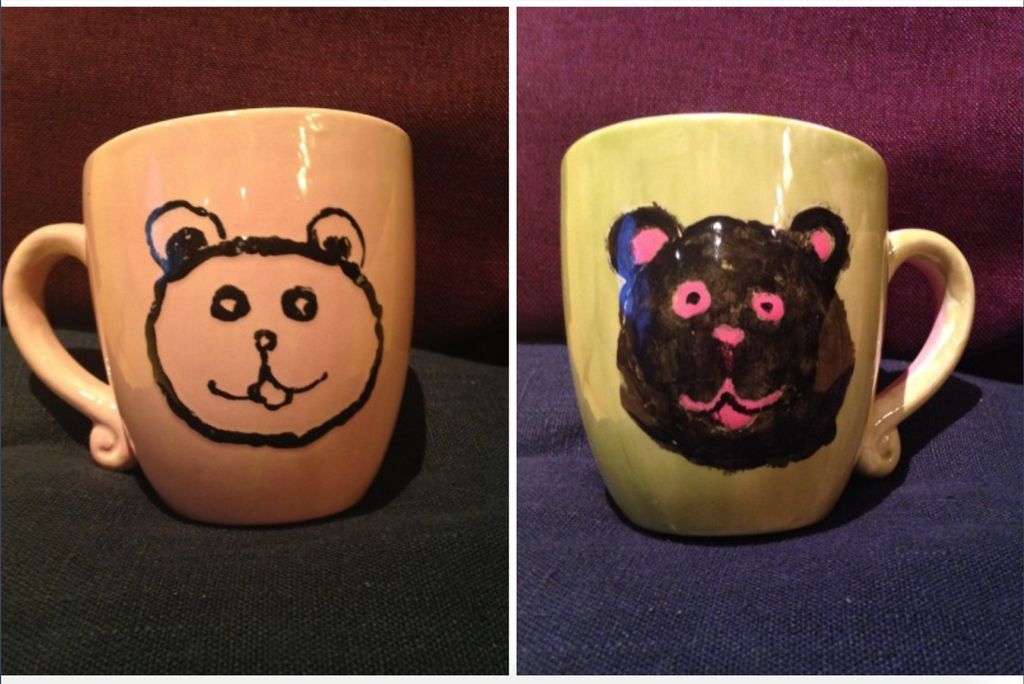 For the first time in the New Trials fandom history, a manipulation has been created. Puffu316 creatively took two actors and recreated a fan favourite fan art of Intimate Meilin and Kai, by Wishluv. Below is her creation next to the original.

Puffu316 is back with her manipulation of Eron Chang!

Very sweet manip of Eriol and Tomoyo in the senior uniforms. 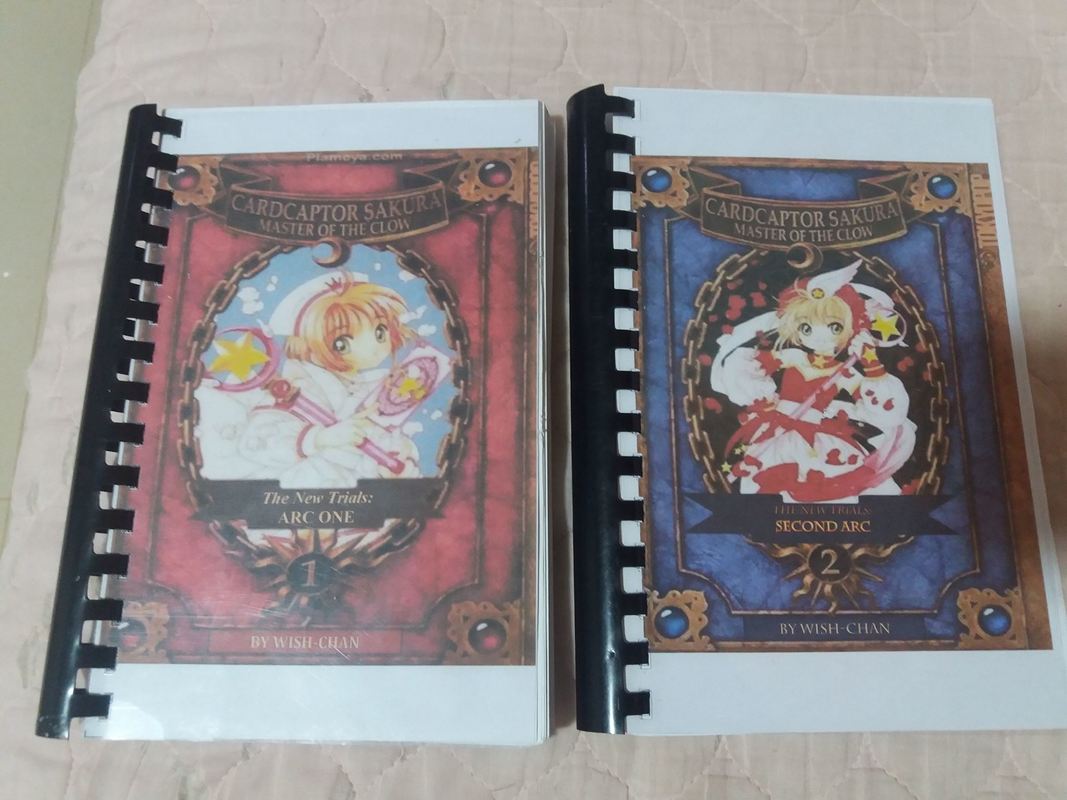